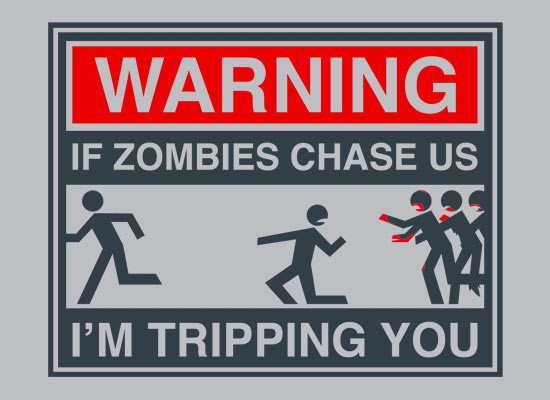 Because zombies are infinite awesomeness in the undead flesh and because this is my blog, I give you: Zombie Limericks!

Can man’s best friend become undead?
It’s a question that has hurt my head
Be careful or you might be hurtin’
Because no one really knows for certain
But I’d advise you to keep Fido very well fed!

There once was a man named Fred
Unfortunately he was of the undead.
He’d shamble around,
Feeding off the town,
Which forced us to fill him with lead.

I once dated a girl named Jane.
She had skin the color of rain.
Did she think I was hot?
Apparently not.
She only wanted me for my brain.

They’re called undead for a reason.
Their bodies have all committed treason.
Aim for the head,
Beware if they’ve bled,
It’s zombie hunting season!

This situation is not of my choosing.
Their sheer numbers ensure we are losing.
So instead of shooting my gun,
I’m writing this pun.
And I hope you find it amusing!

Would it be rude of me to impose
If I could perchance borrow your nose?
I just need a little snack.
To get me back on track.
And then – BRAINS!

Some gibber on just like the Mad Hatter
Others simply shuffle, wander and clatter
But one thing’s for sure
There’s not a good cure
And they only want you for your gray matter.